May 25 1963: The Organization of African Union headed by Haile Selassie I

On May 25, 1963, the Organization of African Union(OAU) was formed now called African Union(AU) headed by Haile Selassie I, the Father of Africa.  The permanent headquarters being established in Addis Ababa, Ethiopia.

The blueprint has been laid for the unification and liberation of Africa. The Organization of African Unity (OAU, 1963-2002) was an alliance of independent African nations working to enhance cooperation between the newly decolonized African governments.

On May 25, 1963, Ethiopian Emperor Haile Selassie invited the heads of the 32 independent African nations at the time to convene at his country’s capital, Addis Ababa.

Haile Selassie I was selected as the first president of the OAU, paving the way for African Unification. To we of the faith, today is also known as Africa Day. 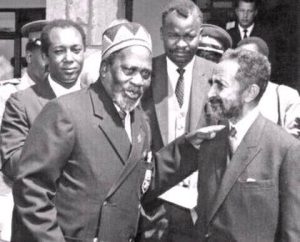 “Today, we look to the future calmly, confidently, and courageously. We look to the vision of an Africa not merely free but united. In facing this new challenge,

we can take comfort and encouragement from the lessons of the past. We know that there are differences among us. Africans enjoy different cultures,

distinctive values, special attributes. But we also know that unity can be and has been attained among men of the most disparate origins,

that differences of race, of religion, of culture, of tradition, are no insuperable obstacle to the coming together of peoples. History teaches us that unity is strength,

and cautions us to submerge and overcome our differences in the quest for common goals, to strive, with all our combined strength, for the path to true African brotherhood and unity.” ~ Haile Selassie I

Haile Selassie I was more than 30 years in His reign when he helped formed the OAU. In addition, Ethiopia which has never been colonized,

served to the country a nation a symbol. A symbol of African independence throughout the colonial period. Countries were now finally gaining independence in Africa,

and this was the chance to fight colonialism and unite together for a greater cause. This while also co-ordinating efforts to raise living standards and defend their sovereignty.

“May this convention of union last 1,000 years,” Haile Selassie, who spent a year preparing the city for the meeting, told the gathered delegates.

Therefore, on this day we celebrate Africa Day, the day when Haile Selassie I helped to form the OAU. We of the faith of RasTafari give thanks for the examples set by HIM.

The Teachings and the ways of Haile Selassie I should be a beacon for all of the faith. We must learn our history and learn our values. Unity constitutes of us all.

Let us come together to realize this goal ad cause, let us put away petty prejudice and unite. I pray that this article may share some light on your path and help to inspire you further.

Let it be an inspiration to continue on the path of Righteousness. Be blessed, Selah.