Groundation day: Haile Selassie I visit to Jamaica on the 21st of April 1966

Thursday 21st of April 1966 marks the date the Lord of Lords, Kings of Kings, The Conquering Lion of the tribe of Judah, Emperor Haile Selassie I landed in Jamaica.

The day in which we of the faith of RasTafari acknowledge as the holy day in Groundation. With the island experiencing rain until the Ethiopian Airlines flight descended upon Jamaica.

Many Rasta, easily over 100,000 of the faith of RasTafari gathered from all over the island to witness this historical occasion. Haile Selassie I, in whom we see as Christ in His Kingly character came to visit we in the west.

Not only did HIM Haile Selassie I address the House of Parliment of Jamaica, but also the people of the faith of RasTafari. His Imperial Majesty greeted by the massive crowd of Rasta,

His Majesty Emperor Haile Selassie I visited Jamaica greeting his followers, and forever changing the course of history. The day was titled “Grounation Day”.

The concept is to show the link of Groundation to this magical moment in time that inspired so many Rasta to take the mission and message of RasTafari into the music and spread it to the world.

Haile Selassie I visit to Jamaica

In addition, Haile Selassie I visited a few Caribbean nation, and Jamaica was one of them. This was also The King’s only visit to the island.

Haile Selassie I had met with a few of the Rasta elders in Addis Ababa. This meeting, His Majesty gave Rasta and other people of African descent gave permission to settle on His personal land in Shashamane.

Therefore, the people of the faith of RasTafari had anticipated this very visit and overly excited to meet their African King. When His flight landed,

a deafening tumult was heard from the crowd, who beat calabash drums etc. Every protocol dropped as the crowd broke past security forces and unto the red carpet that had been laid.

Selassie waved from the top of the steps after the doors opened; Upon His reception, He shed tears. He then returned into the plane for several minutes.

Mortimer Planno, one of the Elders in RasTafari who met with His Majesty, called upon the plane, due to necessity. When Planno reemerged, he announced to the crowd:

“The Emperor has instructed me to tell you to be calm. Step back and let the Emperor land”. After Planno escorted the African monarch down the steps,

journalists were puzzled by Selassie’s refusal to walk on the red carpet on the way to his limousine (hence grounation, Iyaric equivalent of foundation,

“uplifted” with the sound of the word ground in the sense of “making contact with the soil”). He was then driven to the King’s House.

The Impact of HIM Haile Selassie I visit

Rita Marley, Bob Marley‘s wife, converted to the Rastafari faith after seeing Haile Selassie in his motorcade en route to the King’s House.

She claimed, in interviews and in her book No Woman No Cry, that she had seen a stigma on Haile Selassie’s hand as he waved to the crowd, and was instantly convinced of his divinity.

However, having once been viewed as outcast by the Jamaican society, RasTas were now viewed with a measure of respectability. With Rasta now becoming acceptable by the nation,

Reggae music, which is the King’s music became more commercially viable. Thus resulting in the global spread of the faith of RasTafari. 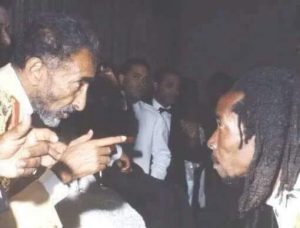 Haile Selassie had established the Ethiopian Orthodox faith in Jamaica, for the Rasta people. His majesty knew that the Rasta’s were not in agreeing with the western churches.

and in 1970, he dispatched Archbishop Laike Mandefro to establish a mission in Jamaica. Mandefro was formally invited by Joseph Hibbert,

one of the original founders of the Rastafari Movement, to teach the Rasta community, and in 1971 Mandefro named Hibbert as a “Spiritual Organizer”.

During this time, Mandefro pointedly refused calls to demand that the Rastafari renounce their faith in Haile Selassie’s divinity, and some 2,000 Rastas accordingly received Orthodox baptisms.

In addition, this day is widely held by scholars to be a major turning point for the movement, and it is still commemorated by Rastafari as Groundation Day,

the anniversary of which is celebrated as the second holiest holiday after 2 November, the emperor’s Coronation Day.

The Rasta principles of equal rights and justice for all and the vision of a world free from walls and barriers. In celebration of true one love is needed today more than ever.

May Grounation Day continue to inspire and give hope to all. To all those needing strength to fight the system of greed, prejudice, and injustice…Jah LIVE!

In addition continue to seek truth and righteousness, love and prosperity. However hard the journey maybe stay strong and upright.

I pray this touches your heart and inspire you to continue believing in Jah. Selah.

One thought on “Groundation day: Haile Selassie I visit to Jamaica on the 21st of April 1966”