Red, Gold and Green, What do these colour mean in RasTafari?

Red, Gold amd Green, what do these colours mean in RasTafari? Why are these three colours, Red, Gold and Green so significant to the faith?

Often times I come across the question what does the Red, Gold and Green in RasTafari mean, where does it come from? People are very curious as to the origins of these colours which represents we of the faith.

The Red, Gold and Green can also be seen on the official flag of Ethiopia. This tricolored representation was also the official banner of the Ethiopian Empire’s Solomonic dynasty.

The faith of RasTafari adopted the colours of the Ethiopians Solomonic dynasty in which His Imperial Majesty Emperor Haile Selassie I was the root and offspring of.

What does the Red Gold and Green mean in RasTafari?

What does the Red, Green and Gold mean in the faith of RasTafari?

Correct order of the colours in RasTafari 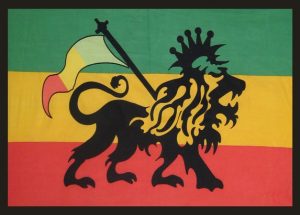 The correct order in which the colours of RasTafari should be worn are:

This order was used from 1930 – until today when His Imperial Majesty Emperor Haile Selassie had the flag of Ethiopia reversed during His reign.

This reverse of the flag, to we of the faith symbolizes signifies that we have placed love, prosperity and peace over the nation.

However, it wasn’t always in this order it once was:

Which represented to us of the faith war over the nation.

The flag had an emblem of the Lion of Judah in the center, and it remains popular with the Rastafari faithful. The current flag of Ethiopia also follows the same sequence, albeit with an emblem of a yellow star encircled in blue appearing in the center.

Significance of the Red Gold and Green in RasTafari

In addition to the meaning of the colours in RasTafari, we’ll be explaining it’s significance to we who are of the faith. Because we of the faith in Rasta are firm believers of the Holy Bible.

We therefore take it’s history which is our history from the days of Adam and the glory of the Kings up till today. According to psalm 60:4 and 5:

Thou hast given a banner to them that fear thee, that it may be displayed because of the truth. Selah. That thy beloved may be delivered; save with thy right hand, and hear me.

Therefore, we display the Solomonic dynasty because of the truth. That we may be delivered from our adversaries and heard by Jah when we call on His name.

To understand the true meaning of Rastafari spirituality, one needs to delve into its origins. Many beliefs followed by the movement have been historically preached by black spiritual leaders who urged followers to study the Scriptures themselves.

The nation of Ethiopia is referred to as Zion, the original birthplace of humankind. Repatriation to Zion, also known as the ‘Promised Land or Glory of Zion’ is of utmost importance and priority.

To truly be of the faith of RasTafari, one must know about the history of RasTafari. One must study and follow the King, His Imperial Majesty Emperor Haile Selassie I.

Therefore, I pray that this may be of help in your search on your path in RasTafari and that it helps you to overstand(understand) more of the faith.

In addition, it is important that you seek the scriptures one chapter per day from Genesis one to Revelations twenty two. With a clear conscience and humbleness of spirit as a child.

Let the light so shine in you, seek your history that was written in the Holy Scrolls. Seek Knowledge and Wisdom. Seek the word of Jah and write it upon your hearts.

This is the Orthodox Way of Life, RasTafari. Selah. Be blessed.