The celebrating of the real CHRISTmas, we who are of the faith of RasTafari knows that His Imperial Majesty Emperor Haile Selassie I, without a doubt is the bloodline of King David.

We who are of the faith of RasTafari celebrate the birth of CHRIST on the 7th of January(29th of Tahsas). Knowing that Yahshua(Jesus) and RasTafari are of the same bloodline, that is King David.

Ethiopia, the oldest nation on record to have followed CHRIST and the nation in which David’s bloodline reigns. Without a doubt being the only nation in history to never be colonized,

Still holds the true and authentic information regarding our history in the Bible. Christmas in Ethiopia is called Ganna (or Genna) and is celebrated on January 7th(or 29th day of the month of Tahsas in Ethiopia).

Rastas CHRISTmas celebration is based on the bible and traditions of the Ethiopian orthodox church. They called this special day as Lidät unlike what the Catholic church used to call it.

It came from an Amharic word which means birthday.

We who are of the faith and truly studied, will follow closely the teachings of HIM and follow after His way. Just like the Ethiopians, we are to fast 43 days leading up to CHRISTmas.

The fast begins on November 25th, a day known as Tsome Nebiyat (Fast of the Prophets), and is held through to January 7th.

Ethiopians  and Rasta alike eat just one meal a day for 43 days, the meals should be free from meat, dairy, and eggs which are all avoided during periods of fasting.

Celebrating at church on CHRISTmas Eve 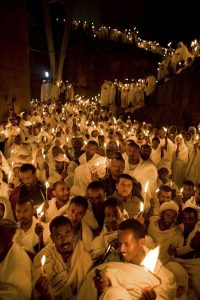 As Ganna is a very religious occasion on the Ethiopian calendar, Orthodox Christians and Rasta alike attend mass on Christmas Eve (January 6th), known in Ethiopia as the gahad of Christmas.

The church service typically begins at around 6 pm and continues through to the early hours of Christmas day. Chanting and singing are central to the services,

Many people go from church to church on foot to take part in various services before the break of dawn.

To we who are of Rastafari it is a time to not only celebrate the birth of our Lord and Saviour in the manner prescribed by tradition.

But to reflect on this event in the context of the original prophecy as told to our father. And the expectations of the time of the manifestation of Elohim not only as Priest and Prophet but King,

Which the Emperor Haile Selassie I has fulfilled. No tree, no snow, no mistletoe. The main decoration depicts the Manger scene, where the Three Kings pay homage to the Infant.

Therefore, it is important to we who are of the faith to keep seeking knowledge and the teachings of HIM. We must hold steadfast upon righteousness and search all things.

I pray you may stay strong in the word of Jah and stay on the path of righteousness. Be blessed. Selah.