Celebrating the life of Empress Menen I on Her 130th Earthstrong

Celebrating the life of Empress Menen I, balance in creation on Her 130th Earthstrong. Queen Omega, The Royal daughter of Zion. Her Imperial Majesty, Empress Menen Asfaw. Born April 3, 1891 she was crowned empress on Nov. 2, 1930 and maintained that royal title until Feb. 15, 1962 when she died at age 70 in Addis Ababa.

She was baptised Walatta Giyorgis in the St Delba Giorgis Church. Her name Menen was given for the most beautiful respected ladies.

Woizero Menen probably met Dejazmach Tafari Makonnen (later Emperor Haile Selassie) at the home of her uncle, Lij Iyasu. This joyful occasion may have inspired Lij Iyasu to attempt to bind Dejazmach Tafari to him more firmly through marriage ties.

He therefore arranged the separation of Woizero Menen from Ras Leul Seged, and sent her to Harar to marry Dejazmach Tafari Makonnen. They were married in July 1911. 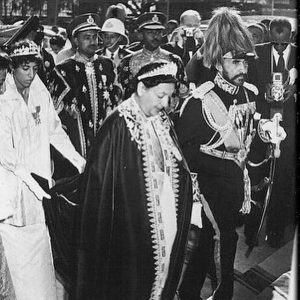 Ras Leul Seged apparently did not hold a grudge against Dejazmach Tafari for this circumstance, blaming it entirely on Lij Iyasu who had ordered it.

He was among the leaders who fought on the side of Dejazmach Tafari Makonnen in the Battle of Segale, and died in that battle. The account given in the Autobiography of the Emperor,

My Life and Ethiopia’s Progress, mentions no previous marriage or children of Empress Menen and no such order by Iyasu, but states only that at the age of 20, they were married by their own mutual consent.

The future Emperor was very impressed by her character and friendly disposition. H.I.M Emperor Haile Selassie then Governor of Harar in His twentieth year said of H.I.M. Itegue Menen “…

Her character is such that, apart from goodness, there is no evil or malice in her. Ever since, we were married, we lived together, by virtue of her being fertile, in one family joy, as well as sadness.

Living through the lineage of King Solomon and Prophet Mohammed representing the Woman of the world, in particular Rastafari Woman,

who in general are more connected, knowledgeable and have more Love for Her Majesty. For InI she is the perfect example for Woman to look to,also having an important role for Female equality around the world. Being One with Rastafari and therefore blessed to have this opportunity to set a good example on a world wide scale.

Empress Menen was born 3 April 1891, Gregorian calendar (25 March 1883 Ethiopian Calendar) as Woizero Menen Asfaw (or Manan Dagmawit) in the village Egua of the Ambassel region in the Wollo province.

The name Menen was usually given to the most beautiful and respected woman in Ethiopia. At eleven weeks (80 days) on the 21st of June she was baptized Walatta Giyorgis (Wolete Giorgis) in the Ethiopian Orthodox St Delba Giorgis Church.

Their(RasTafari and Hers) sacred and happy union lasted forty-seven years during which time they had six children – three daughters and three sons and many grandchildren. Listed below are details of their children:

1. Their first daughter: Princess Tenagne Worq was born in January 1913, being christened Fikirte Mariam. She married Ras Desta and then Ras Andargatchew, having six children and many grandchildren.

3. Second daughter: Princess Zenabe Worq, born in July 1918 and christened Hirute Selassie. She married Haile Selassie Gugsa but she passed way in March 1933 having had no children.

4. Third daughter: Princess Tsehay, born in October 1920 and christened Wolete Birhan. She married Galabiye Abebe and passed away in August 1942 without having any children.

5. Second son: Prince Makonnen, later Duke of Harar was born in October 1923 and christened Araya Johannes. He married Princess Sarah Gizau and passed away in May 1957, having had five sons.

The day before Empress Menen received the divine coronation on the same day as the Emperor, she joined him in a night of fasting and constant prayer until the early morning hours as they prepared to take on the mantles such as:

For the first time in Ethiopian history, Empress Menen was crowned Queen of Queens, alongside Emperor Haile Selassie I, King of Kings on 2 November 1930 at St Giorgis Church in Addis Ababa. 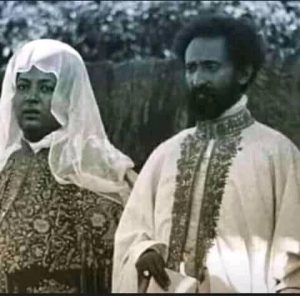 The 90th Anniversary of the Coronation of H.I.M. Haile Selassie I

On Coronation day, H.I.M Empress Menen was given a gold and ivory sceptre. At the foot of the sceptre the name of YAH is engraved and the Pentacle of King Solomon.

She was crowned Itegue Menen, Itegue being the title of an Empress. It is to be noted that H.I.M Emperor Haile Selassie I, set a new precedent for how women were viewed,

by changing the course of Ethiopian history insisting that the Empress be coronated on the same day as the Emperor and not three days later as was the custom, noting that both are from the King Solomon and Queen Makeda lineage.

CHARACTER OF THE EMPRESS

A mother of 6, she balanced a stable family life together with her King and husband, Ras Tafari, crowned Emperor Haile Selassie I.

She became His trusted adviser in national and international affairs, and strengthened the confidence of millions of women by educating them and giving them opportunities to shine.

Her garments were always royal, elegant, extremely appropriate by international standards, and indeed, they show her royalty with the finest of silks, cottons, and other fine materials often woven with gold, silver, and velvet.

Empress Menen performed perfectly in the role of Empress. In her public role she combined religious acts, concern for social causes,

and support for development schemes with the majesty of her Imperial status. Outwardly she was the dutiful wife, visiting schools, churches, exhibitions and model farms, attending public and state events at her husband’s side or by herself.

She took no public stand on political or policy issues. Behind the scenes however, she was the Emperor’s most trusted adviser, offering advice on a whole range of issues and assisting in writing the elegant speeches of His Majesty.

History of Rastafari: The Glory of the Kings | Kebra Nagast

She avoided the publicly political role that her predecessor as Empress, Empress Taitu Bitul, had taken, which had caused deep resentment in government circles during the reign of Menelik II.

Although Early in the reign of Haile Selassie I an army revolt broke out and His Majesty was taken hostage. Her Majesty commandeered a tank to brake through the garrison’s gate to free her husband.

Empress Menen is known to have been devoted to the traditions of the Ethiopian Orthodox Tewahedo Church, including honouring of holy feasts such as Passover and Sabbath Days.

These traditions include much fasting and prayer, and strict observance of church rules and regulations. This made her a model Queen for all women in Ethiopia, 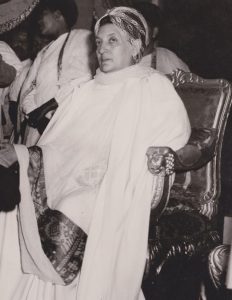 by remaining involved in the current affairs and progression of her country while remaining steadfast to the holy traditions of the Ethiopian Empire.

The Teachings of HIM: RasTafari speech on Religion | Wise Mind

As a devote and faithful Christian in the Orthodox faith she was often in deep prayer. She went to St. Mark church every morning and stayed up to 9 A.M. praying to YAH and received monks and nuns that came from different churches and monasteries.

Every Friday She went to St. Mark Church for special praying since Friday is the day which Yahshua was crucified. When the Empress went from the palace to the church,

she received women who lost their husbands in the war front and tried to fulfil whatever they asked of her.

The Empress never alienated other churches, she always read their books and liked to give attention for the interpreted views of the church. She is a Queen to rise up and fulfil every standard as a woman, wife, monarch,

Christian, mother, and a benefactor to all who needed her most in her country, Empress Menen Asfaw has become the perfect role model for a woman.

The Empress supported numerous charitable causes for the poor, the infirm and the handicapped. Empress Menen let Orphans to learn who lived in areas outside the capital city.

Haile Selassie I To The World Council For The Blind

Humanitarian Haile Selassie I on THE “FREEDOM FROM HUNGER” CAMPAIGN

She listened to the problems of the poor and always visited patients in hospitals.

She took an active interest in all that went on, frequently visiting schools, looking in on classes and presiding at awards and graduation ceremonies.

Empress Menen’s contributions to churches, schools, hospitals are widely recognized as unparalleled by any other woman in Ethiopian history. H.I.M Empress Menen sought to serve the people instead of demanding services from them.

Empress Menen herself had been in deep sorrow because of the passing of some of her beloved children. As she is strong spiritually, the Almighty YAH gave her strength to overcome this.

Therefore even though she lost children she never neglected the country’s problems, this is well known by Ethiopian people. She passed each problem patiently.

Her Majesty, was a fine example of how women of today should lead their lives. Virtuous and royal, courageous and divine, faithful to the almighty.

Royal Daughters of Zion | Portrait of the Virtuous Wife.

Therefore, Royal Daughters of Zion, fear the Lord, for beauty is vain and eat not of the bread of idleness. Similarly, hold steadfast to the word of the Most High and turn away from the lusts of this world.

Who can find a virtuous woman? for her price is far above rubies. The heart of her husband doth safely trust in her, so that he shall have no need of spoil.

She will do him good and not evil all the days of her life. She seeketh wool, and flax, and worketh willingly with her hands. Her children arise up, and call her blessed; her husband also, and he praiseth her.

Many daughters have done virtuously, but thou excellest them all. Favour is deceitful, and beauty is vain: but a woman that feareth the Lord, she shall be praised. 31 Give her of the fruit of her hands; and let her own works praise her in the gates.