HIM Haile Selassie I believed that poverty was a result of a lack of education. Therefore He made it priority to help eradicate this by a means f establishing schools all over the world.

Ethiopia of course was no exception to this. In fact He made it priority to ensure the children of Ethiopia were properly educated in order to establish a better life and standard of living amongst His people.

….In the field of education, We take great pleasure in the fact that the opening of Ethiopia’s first University is near at hand. Henceforth,

students who have demonstrated their capacity and ability will no longer leave their homeland to pursue higher education. The University’s faculty is being recruited and its physical plant is being established.

We Ourself have presented Our Guennete Leul Palace and its grounds, inherited from Our beloved father, as a free gift to the nation,

to serve as the nucleus of the University’s physical facilities, and a formal ceremony for the handing over of the Palace will be held in the near future …..

The population of Our Capital, Addis Ababa, have expressed through their Mayor, their desire to erect a monument to Our honour,

that they on their own initiative, have started raising funds, and have requested that We lay the foundation stone of this memorial today. 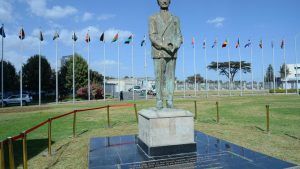 It has also been confirmed that the whole people of Ethiopia have joined hands with the people of Addis Ababa in this effort. As was indicated on the occasion of

Our Birthday Anniversary on July 23rd last. We shall now make known to you Our intentions in reference to this monument. We wish first of all to state that

Our heart was touched with Our beloved people’s desire to erect in Our honour a statue in recognition of services which We have rendered to them and to Our country.

There can be no better way for a people to show their deep gratitude to their Sovereign. By what means can man’s achievements in this world be best remembered?

Many people believe that this could be done by the erection of physical and material structures; others believe that their works are in themselves lasting monuments.

We, for Our part, think that man’s contributions which live to influence the life and progress of posterity, are the most permanent monuments that can ever be erected.

It is now 32 years since We assumed the high service of aiding and guiding the destinies of Our people. Counting from Our Regency, when We were destined to the Imperial Throne of Ethiopia.

HIM Legacy and service to Ethiopia

During this period of Our Reign, a series of problems and trials have had to be faced. There can be no better testimony to the recognition of

Our devotion to the cause of Our country and to the welfare of Our people, entrusted to Our care, from the day when We were chosen with the

Grace of Almighty God the anointed Emperor of Ethiopia, than this expression of noble sentiments from Our beloved and loyal people.

We have abiding faith that the Almighty, Who has vouchsafed Us the privilege to reach this present stage, will grant to Ethiopia a bright future and an enduring destiny.

Now, when Our people are willing to erect a statue in Our image. We feel it a duty on Our part to consider what would be the most appropriate means of incorporating in a concrete and lasting manner the sentiments of Our people.

.”However, Our programmes undertaken in the economic field for augmenting the material welfare of Our subjects, has not made Us forget that, according to the words of the Bible, “man does not live by bread alone.”

We believe that the spiritual and moral welfare of Our people is as important as their material well-being. Thus, it is that following the liberation of Ethiopia from the yoke of the enemy. We have devoted a very large part of Our budget and national revenues for the establishment and development of schools.

During this short period of ten years no less than fifteen secondary schools, of which the last, the General Wingate School, was opened by Ourselves this year. Therefore have been established directly as a result of Our initiative and direction. The number of students enrolled in schools in Ethiopia has nearly tripled during that same period.

Shortly, the University, the foundation-stone of which We have laid, will be opened under Our direction. We face with confidence the future of public instruction in Ethiopia.

If We have made so many sacrifices for the education of Our youth. It is because We are convinced that only through intellectual progress and universal education can Ethiopia come into its own and make its just contribution to the history of the peoples of the Middle East.

We believe that from truth alone is born liberty and that only an educated people can consider itself as really free and master of its fate. It is only with an educated people that representative and democratic organs of government can exercise their influence for national progress.

Our Address from the Throne therefore testifies to the importance which We attach to education and, at the same time, to your role as representatives, in the development and progress of Our people….”

Therefore, we who are of the faith and those seeking knowledge of RasTafari. Therefore must seek the teachings of HIM, as well as His works.

We must seek to know all about His Majesty and the works He accomplished while in the flesh. It is important for any one who is one their journey to seek the wisdom and knowledge of HIM.

I pray that your faith may increase and be strengthened with truth and love. I pray that this article helps to inspire you to learn and to seek education.

Not just that of formal education but also informal, those not taught in the schools. Learning only ever stops at the grave, we must always seek to know more and more.

Education is without a doubt a form of liberation for the people. Therefore I encourage you to continue to seek knowledge and wisdom and continue learning in this life.

Seek the wisdom and knowledge of the Most High Creator. And to those who are of the faith of RasTafari, read your bible a chapter a day.

From Genesis one to Revelations twenty two without skipping a page or a day. With a clear conscience and humbleness as a child.

I pray the Most High Jah be with you always. Be blessed. Selah.