The Truth about Yoga and Rastafari: Do Rastas believe in the practice of Yoga

Yoga, what is “yoga” and where did it all started? As explained by Wikipedia. “Yoga is a group of physical, mental and spiritual practices or discipline which originated in ancient India”.

Although yoga consists of spiritual practices. In addition to its ancient tradition and history, yoga is not of the faith of “Rastafari”.

Similarly”Rastas” who follow the teachings of H.I.M DO NOT practice anything outside of “The Bible“. As it is not of the faith.

Is it ok for “Rastas” to do “Yoga”? Although viewed as a spiritual practice, Do yoga and Rasta correlate? There are many who say they are “Rasta” and still practice yoga.

They feel that it is ok. But like many things, the problem is lack of knowledge to the root. So being linked with exercise and a spiritual practice.

Many engage in it’s practices thinking it’s ok. Don’t let this deceive you. Being a “rasta” means to separate oneself of this world.

Before we discuss “yoga” and it’s relation to “Rasta”. We’ll dig in to some scriptures. First we have Exodus 20:3 “Thou shalt have no other gods before me.”

“Rastafari was a firm believer in “The Bible”. Being followers of HIM, we adhere to the teachings of His Majesty. I mentioned this scripture, because soon you’ll see practising yoga is putting other gods before HIM.

Scriptures also prophesied that these type of things would happen during the end times. 1 Timothy 4:1 says

” Now the Spirit speaketh expressly, that in the latter times some shall depart from the faith, giving heed to seducing spirits, and doctrines of devils”.

So we’ll be examining how yoga correlates to other doctrines and demons.

Like I said, we have to first identify the root of Yoga and educate ourselves on what it is. One thing to note about “Yoga” is that it comes from Hinduism.

“Hinduism embraces many religious ideas. For this reason, it’s sometimes referred to as a “way of life” or a “family of religions,” as opposed to a single, organized religion.

Most forms of Hinduism are henotheistic, which means they worship a single deity, known as “Brahman,” but still recognize other gods and goddesses”. This is from History.com.

There’s a saying that there is no Yoga without Hinduism and no Hinduism without yoga. As a “Rasta” learning about yoga and hinduism being related, certainly raised a red flag.

It is an eastern occult practice rooted in “paganism”. And has been used a practice to control the senses and ultimately the mind. As mentioned before, Hinduism recognizes other gods and goddess and or “paganism”.

I am writing this article to point that anything that points back to “Paganism” is not of “Rasta”. A man is free to worship and practice whatever it is that feels best to them.

This article is not to say you can’t practice these things. I am just writing this to say “This is not a practice of Rastafari”.

What is the purpose of Yoga?

Today many misunderstand yoga. The main form of yoga practised is the “Asana” which focuses on physical posture.

It’s known to have many health benefits like lowering blood pressure and boosting of the immune to name a few. These are not the actual goals of yoga.

According to Hinduwebsite.com “Yoga is the most important contribution of Hinduism in the modern world”. A known yoga instructor B.k.S Iyengar stated ” Asanas are not meant for physical fitness, but for conquering the elements, energy and so on.

And how to be able to perceive the difference between gunas, and to experience that there is something behind them. Operating in the world of man –

that is what “asanas” are for. The process is slow and painstaking, but a steady inquiry facilitates a growing awareness”. Yoga, as clearly stated by an instructor is not primarily for exercise or fitness.

Yoga is a spiritual practice, which aligns one mind and body with that of the universe becoming self aware. That is yoga, whether you’re aware of it or not.

I am here to edify those truly seeking “Rastafari” and wanting to learn of its truths. And as a “Rasta” we follow the spirit of truth which is in HIM. Spoken of by “Our Lord and Saviour Yahashua Hamashiach”. 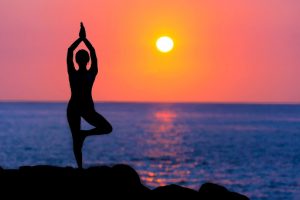 Spirituality in any other way or form, is a new age teachings, which is another way of calling upon spirits. According to Hinduwebsite.com “modern yoga practice often includes traditional elements.

Inherited from hinduism, such as more and ethical principles. Postures designed to keep the body fit. Spiritual philosophy, instructions by a guru, chanting of mantras etc.

In hinduism, there is an underlying belief that the true nature of self, revealed through the practice of yoga is of the same nature of god”.

We are not god, though we were made like unto HIM. Isaiah 55:8-9 says “For my thoughts are not your thoughts, neither are your ways my ways, saith the LORD.

Yoga and other “gods”

Those that are doing yoga, in the name of “rastafari” don’t know that they’re doing yoga. Nothing about yoga is “Rasta”. Even the yoga positions had been specially designed to worship other gods.

The yoga postures are offerings to the gods. I am writing this to edify that doing these yoga positions with the proper breathing technique, that it is said you’ll be accepted by the gods.

And these gods are not the same god acknowledge by “Rastas” in HIM. It’s important to note that all postures are in reference to a false god all with meaning and associated with the occult.

Many of the postures associated with yoga are salutations. Salutations to the “sun god and moon god”. If you know anything about paganism, you’ll know that pagans worshiped the sun and moon gods.

We should understand the dangers of spirituality. In this world which consists of physical and spiritual. We should know that doing things that has root in “occult”, we give access to demons to enter in.

We cannot have the spirit of HIM in us and want to invite in demons.

We should understand that we the children of “Rastafari” know what is of HIM and that which is not of HIM. Like anything else, anything you engage in, learn the root of where it is coming from.

Don’t just engage in things because it looks spiritual and good. Remember in all things to pray, and ask the spirit of truth to lead you in the path of HIM.

Don’t let because something looks enticing you just jump right into it without checking the roots. “The devils” tools has been portrayed to look good on the eyes and seem right.

But nothing designed from “the devil” will ever result in the righteous ways. 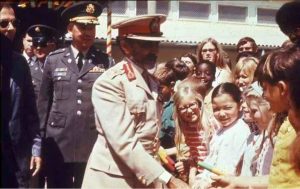 As children of “Rastafari” question everything you do. Pray, ask the most high for guidance and direction. Read your bible for yourself, one chapter per day from genesis 1 to revelations 22.

Without skipping a day or a page, read with a clear conscience and humbleness of a child, and seek HIM and his words. In it man can find salvation.

“Today man sees all his hopes and aspirations crumbling before him. He is perplexed and knows not whither he is drifting. But he must realise that the Bible is his refuge, and the rallying point for all humanity.

In it man will find the solution of his present difficulties and guidance for his future action, and unless he accepts with clear conscience the Bible and its great Message, he cannot hope for salvation. For my part I glory in the Bible”. – Haile Selassie I.